FIFTY locations across Glasgow are to be selected as possible sites for secure on-street cycle parking as part of a feasibility study into providing the facility for city residents.

Glasgow City Council officials say the study will “outline recommendations to progress viable options to implement, finance and manage on-street cycle parking infrastructure” providing a “cost-effective, secure and accessible system which can be implemented across the city”. 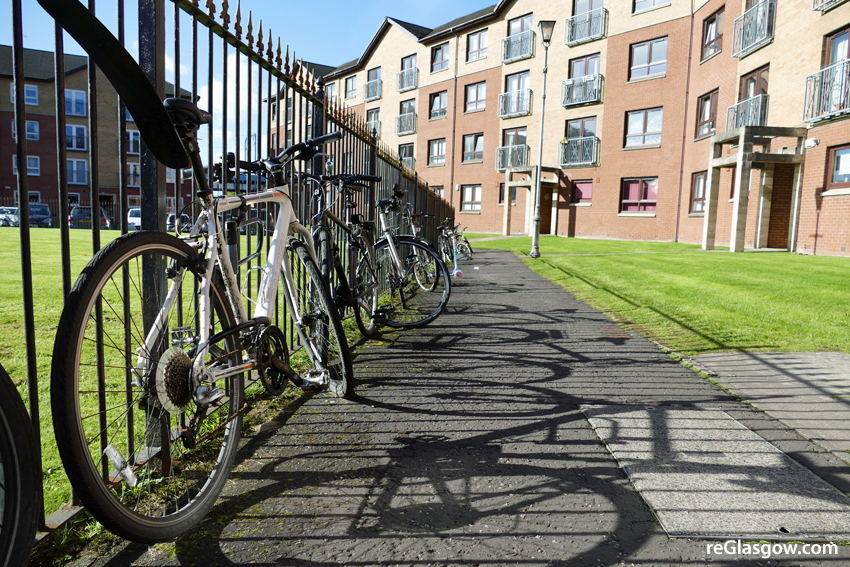 Bikes tied to railings outside flats at Ferry Road, Glasgow

A report updating councillors points out that Glasgow has a significant number of residents living within four miles of the city centre in properties such as Victorian tenements, high-rise flats and apartment blocks which often have limited cycle storage space and are based around narrow central stairwells.

The report states: “These can present problems for moving bicycles and, where stored in a communal space, can cause obstruction and attract a greater risk of theft. Also, smaller lifts, where lifts are available, present problems for the movement of cycles to the floor of residence.

“Such barriers, that are a result of inherited architecture of the city, are a hindrance to cycling and reduce the potential for increasing levels of cycling in these areas.

“These storage issues conflict with the desire of residents to lead more sustainable and active lives, as confirmed by those residents who have submitted multiple requests for secure cycle parking.”

The preference is for bread bin-shaped cycle hangars that would be placed on-street, replacing vehicle parking where necessary, or on under-utilised hard-landscaped areas. Larger cycle shelters would be considered for tower blocks.

Potential methods of management will vary depending on the location.

There is currently only money available to implement cycle storage in two areas — it is proposed that these will be as part of the major active travel projects Connecting Woodside and South City Way (from Queen’s Park to the City Centre). Further potential sources for funding will be identified.

The report also states: “It should be noted that all the identified management models generate ongoing costs for management and maintenance…and that free provision has been shown to result in the non-return of keys when the facility is no longer required, therefore a fee needs to be decided upon and applied to ensure that the space is utilised.

“The feasibility study will identify a list of around 50 recommended locations to be progressed. These locations will be identified through the development of a communication and consultation strategy to include elected members, local community councils, requests and through analysis of factors such as household density, proximity to current and planned infrastructure, and percentage of residences above ground level.

“It is envisaged this will be completed by early 2019 with a further report being presented to this committee at that time.”