NEW Bigger Bins In Glasgow Will Help Environment And Save Cash

GLASGOW’S new, big street bins are set to save the city from throwing away more than 850,000 plastic bin bags every year.

The programme will mean a 60 per cent increase in street bin capacity. The new bins are replacing 10,000 old-style pole-mounted and free-standing bins being replaced.

An audit conducted by Keep Scotland Beautiful identified an 18 per cent reduction in litter in the areas where the bins have been stationed and initial surveys within these communities indicate members of the public are expressing high rates of satisfaction with them. 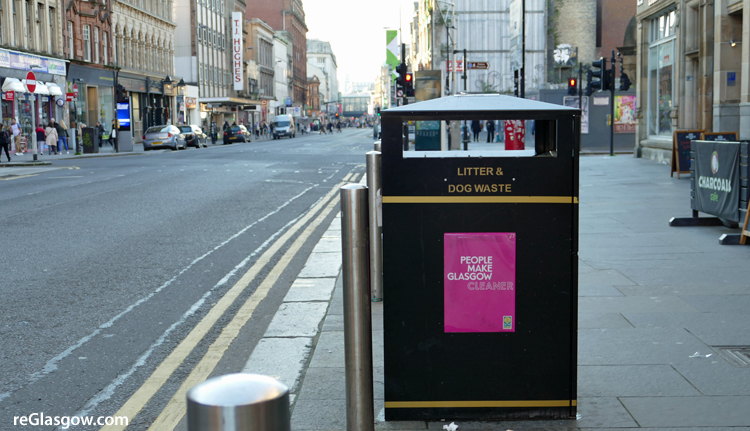 Sensors in the bins are currently being used to determine bin fill rates and to help the council develop suitable collection schedules. They require to be emptied much less frequently which improves the efficiency of the service.

Unlike the old-style bins, the housing for the new design contains a wheelie bin, which means there is no need for a plastic bag lining that will end up in landfill along with tonnes of general waste. Not using plastic bags will eventually save the council up to £60,000 per year.

Councillor Anna Richardson, City Convener for Sustainability and Carbon Reduction, said: “Our new street bins are already making a positive impact and we hope to see a much cleaner Glasgow as they are installed across the city. The new bins are much larger and they contain the rubbish much more effectively. People now have no excuse not to use a street bin to dispose of their waste. Everyone still needs to do their bit to keep Glasgow tidy.

“These larger bins are much less likely to overflow and will prevent rubbish from being blown on to the street. We also have a new collection system for these bins, which means we no longer have plastic sacks sitting in the street waiting to be picked up. These bags sometimes split or are ripped and so we can now avoid refuse spilling on to the road, which will make a big difference.

“But one of the major pluses with the new scheme is the big reduction in the use of disposable plastic bags. As a city we are committed to reducing our reliance on single-use plastic and the switch to the new bins will stop us chucking away hundreds of thousands of plastic sacks every year. Work on a Plastic Reduction Action Plan for Glasgow is now underway but the introduction of street bins is a big step in the right direction in our efforts to stop using plastic so freely.” 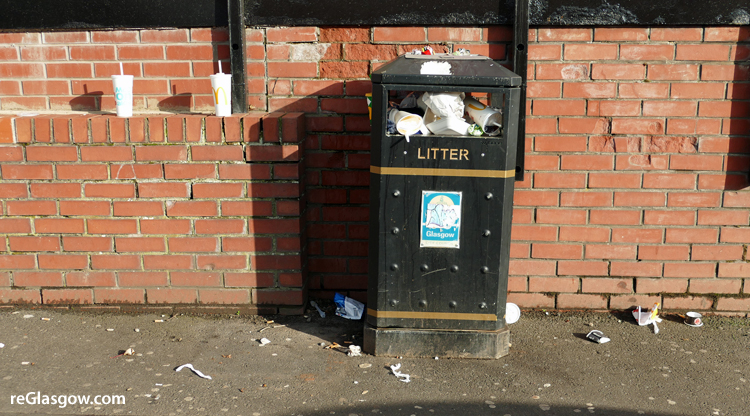 An old bin struggling to cope

Around 100 residents in Drumchapel, Priesthill/Househillwood, Gorbals and Dennistoun were surveyed about their views on the bins before and after their installation. Previously between 95 and 100 per cent of residents thought the existing provision of street bins was poor or very poor. Following installation the reaction of residents was transformed to between 86 per cent and 100 per cent viewing the bins as good or very good.