CYCLING in and out of Glasgow City Centre has increase by almost 200 per cent in the past decade, according to council officials.

The increase comes after measures to make the city more bike-friendly — such as the South West City Way, pictured below — and as work continues on major projects to make cycling more attractive. 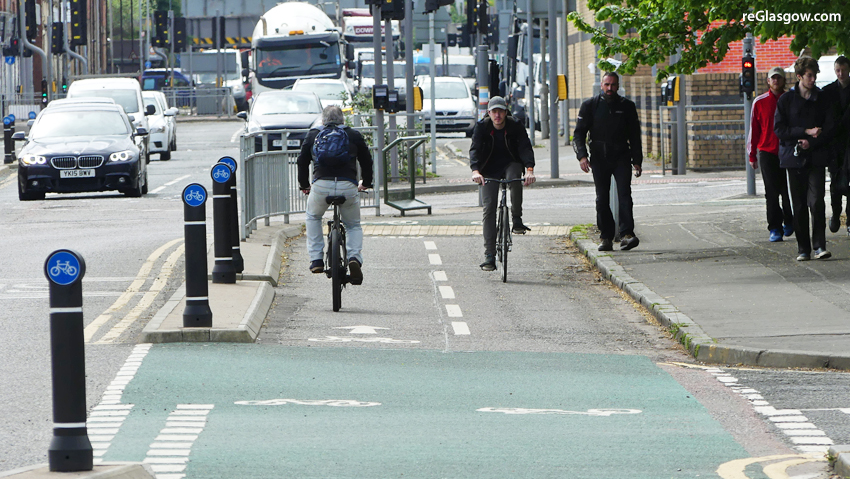 A report by city officials outlines initiatives that are in the pipeline:

Cycling is an important element of the design for the Sighthill Transformational Regeneration Area which will include:

• A new pedestrian and cycle bridge across the M8 to provide a link to, and through, the development from the City Centre
• Two-way segregated cycleways along a proposed civic boulevard through Sighthill and on the new northern road that links Springburn Road to Keppochill Road with a new bridge.
• A four-metre wide illuminated core path through Sighthill Park from the northern road to Pinkston Road
• Four-and-a-half-metre wide shared-use footways on Pinkston Road
• Integration of the existing Glasgow to Cumbernauld core path that runs along the south edge of the masterplan area

The City Centre ‘Avenues’ work at Sauchiehall Street West (Charing Cross to Rose Street) started on site in January 2018 with completion currently scheduled for May 2019.  This includes a two-way cycle route segregated from traffic.

Design work has started on proposals for Argyle Street, Sauchiehall Precinct and the Underline (a linear public realm project under the M8 to link both sides of New City Road).

A pedestrian-cycle bridge is propsoed between Govan and Partick and improved cycle infrastructure is planned between Glasgow University/Kelvingrove and the Riverside Museum.

The Collegelands Calton Barras project will improve cycling provision from the inner East End to the City Centre by improving existing connections and creating new routes.

Construction of the South City Way, a three-kilometre segregated cycle route from Queen’s Park to the City Centre, started in December on Victoria Road.

The first phase of work has been between Queen’s Park and Queens Park Railway Station. Work on phase two — between Coplaw Street and Cumberland Street — is expected to start soon.

Design work for the remaining phases, Queen’s Park Station to Coplaw Street, Cumberland Street to the City Centre and the City Centre section continues with construction scheduled for 2019.

Meanwhile the ‘Connecting Woodside’ project includes a strategic segregated cycle route along St George’s Road, linking the Forth and Clyde Canal and regeneration work at Port Dundas and Sighthill, with the City Centre and in particular, the Sauchiehall Street ‘Avenue’ project. During 2018, design of the cycling and walking routes and public spaces will continue.

Design work and consultation is also taking place over several schemes to improve cycling walking and public space in the Battlefield Rest junction on the South Side and Queen Margaret Drive and Byres Road in the West End.

Design work has been completed for a new segregated cycle track on Jura Street, linking Bellahouston Park/ Paisley Road West with Craigton Road to help people travelling to the Queen Elizabeth University Hospital from the south side of the city and enhance access to Bellahouston Park for those living locally.

Gritting of the South West City Way was undertaken during the winter of 2017/18.

City officials say 2017 was “an extremely active and productive year for developing cycling within Glasgow across all forms of cycling for commuting, leisure or sport purposes.”

They add: “Indeed, the number of people who cycle in and out of the city centre has increased by nearly 200 per cent since the baseline count in 2007.”

The city has a vision to create “a vibrant cycling city where cycling is accessible, safe and attractive to all”.