RUNDOWN Glasgow railway arches can be transformed into shops, food and drink outlets, offices and other businesses, city planners have agreed.

Network Rail plan to redevelop 16 spaces underneath the City Union line in the Laurieston/Gorbals area in two phases.

Planning permission has now been given for the first stage, involving seven arches, at Cleland Lane, near the Citizen’s Theatre. A further arch will be turned into a through pedestrian route improving access between the two neighbourhoods.

Ten parking spaces would be formed by using some of the open ground beside Cleland Lane. A condition of planning consent is that there will not be consecutive food/drink premises.

A report by Glasgow planning department states: “The proposals have been promoted on a cross-party basis between Network Rail and Glasgow City Council as part of the wider place-making activities to successfully knit the emerging Laurieston residential community with the established communities and commercial facilities available within the Gorbals.

“It is fully accepted that the proposals will represent a significant opportunity to activate an otherwise dead area of railway infrastructure and greenspace, whilst enhancing the immediate place-making characteristics and enhancing connectivity between two neighbourhoods.”

A statement submitted by Network Rail with the application explained: “The proposal is a refurbishment project which seeks to bring new uses into the area and visually enhance the arches and its surroundings.

“It will contribute towards the wider transformation of the Laurieston area which has seen a mix of new housing tenures and types in recent years, and bring services and small-scale employment opportunities to the area.

“In addition, the opening up of arch seven to form a new pedestrian route [connecting Cleland Lane and Laurieston Road] will make the railway structure more permeable and reduce walking distances for local residents travelling in an east-west direction.” 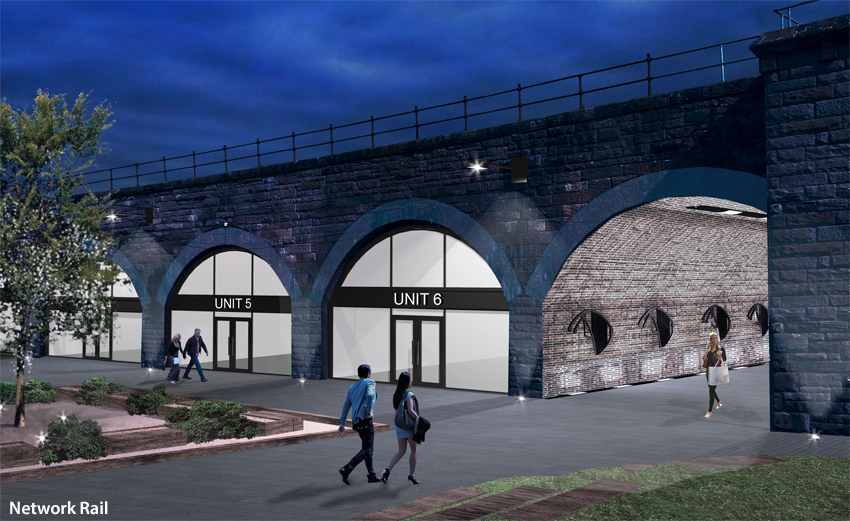 The statement continued: “At this stage in the project it is not clear what the mix of uses are likely to be. Each arch is relatively small and likely to be attractive to small, independent businesses.

Network Rail added: “The works are part of a phased approach to bring new uses into the area which will, in the longer term, include units nine to 16. The type of uses for units one to eight will be partly market-driven and there is a need for flexibility in the planning consent as Network Rail have not yet identified suitable tenants.

The arches have been used in the past for small-scale and/or temporary functions and are currently gated on the west side (Cleland Lane) and bricked up on the east side (Laurieston Road).