AN eyesore cycle route bridge has been brightened up thanks to a community mural by a Glasgow graffiti artist and local young people.

Balmoral Street Bridge on the bike path in Scotstoun was a magnet for vandalism and anti-social behaviour but it has been brightened up by professional graffiti artist, Danny McDermott, and teenagers from Dumbarton Road Corridor (DRC) Youth Project who designed and create the 32-foot-long artwork as part of a £6,500 project. 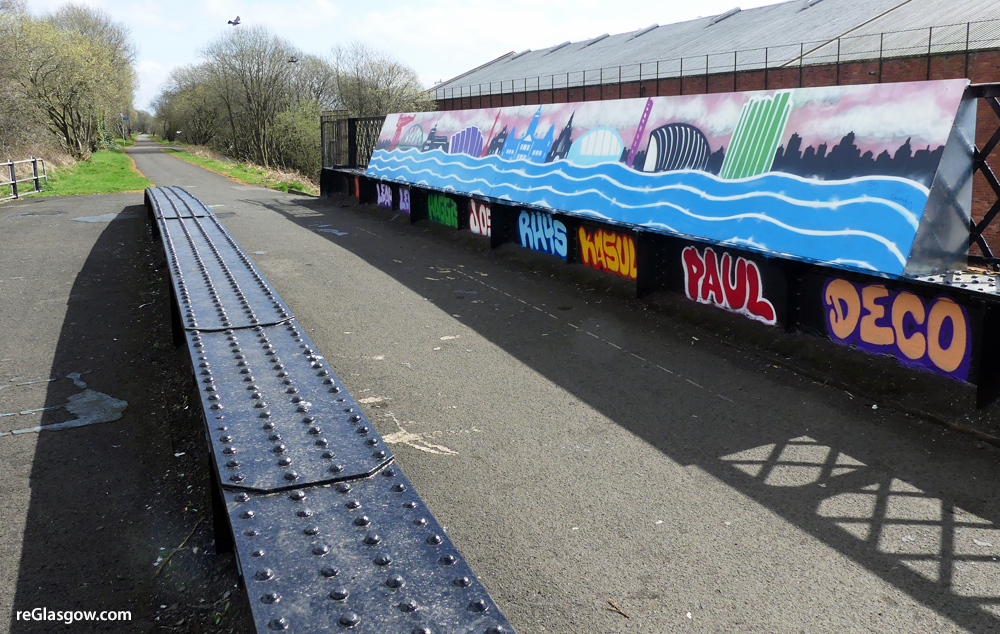 Broken glass, weeds, overgrown shrubbery and litter were removed from the bridge before remedial work and painting was carried out on the steelwork. Local young people also took part in the clean-up to make way for the mural which has been painted on to four large metal panels mounted on the inside of the bridge where it can be enjoyed by walkers and cyclists. The design features the city skyline with iconic landmarks and incorporates elements of the local landscape such as waves to represent the River Clyde and the Scotstoun Community Council logo.

Partners including Community Safety Glasgow, Scotstoun Community Council, Glasgow City Council, DRC Youth Project and Sustrans teamed up to tackle issues on the bridge which is part of the Glasgow to Loch Lomond cycle route. Local businesses, R&R Fabrications and Maclean & Speirs Industrial Painters, were also keen to pitch in, carrying out work at much-reduced rates to help the community. 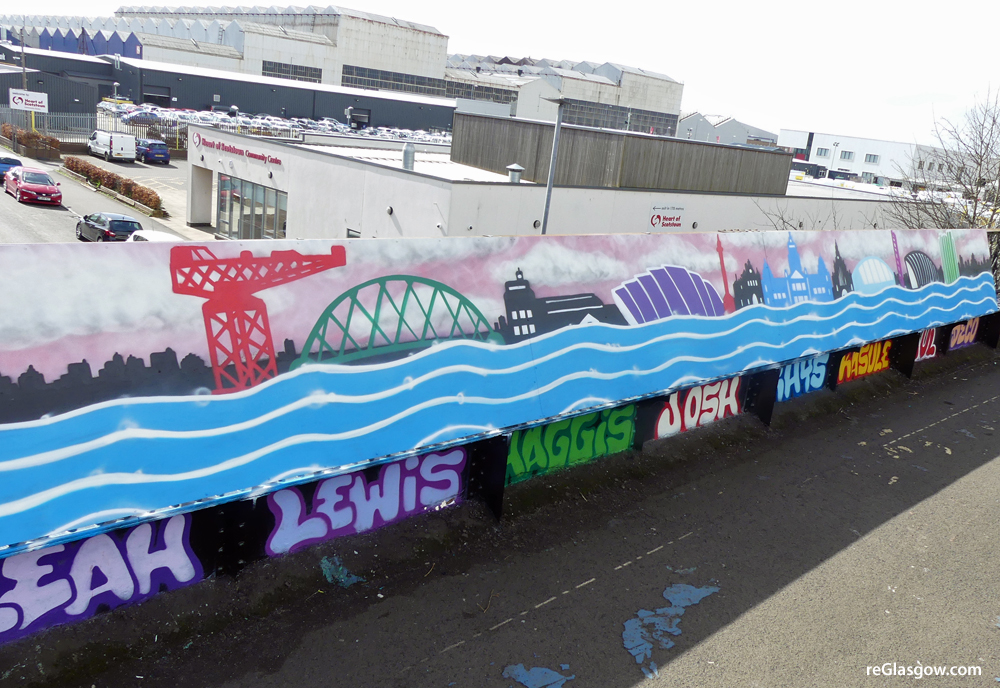 The street art project was created to inspire and involve local young people in improving their neighbourhood. It aims to boost participants’ self-confidence and break down barriers between different generations.

Ben Harris (15) said: “We’re all proud of the mural and it was good that we could put our names on it. Dan was cool and we learned a lot from him. We worked on it over a couple of months and I’d like to do it again. Sometimes older people are worried when they see young folk in the street — even when we’re just walking along. It’s good that they can see us doing something good for the community.”

Lee Kerr (15) added: “The mural’s pretty nice and it was good getting to do something like that. Getting involved stops you just sitting in playing computer games.”

Councillor Michael Cullen said: “It was great to see local young people get immersed in the project and focus their energy on transforming the bridge. I’m sure the mural will be something they’ll take real pride in and ownership of. The bridge has been a trouble hotspot in the past, but this new mural promises to be a bright, eye-catching addition to the local area. The panels are mounted on the south side of the bridge and will be looked after by the young people going forward.”

Graffiti artist Dan (38), who has worked on several Glasgow murals including the Gorbals’ Vampire and the Scottie Dog in Maryhill, said: “Working on graffiti murals is very engaging for teenagers as it’s seen as a bit edgy. The Scotstoun group has been really interested and enthusiastic. We worked on drawings and canvases together before finalising the design and spraying it on to the metal boards mounted on the bridge. 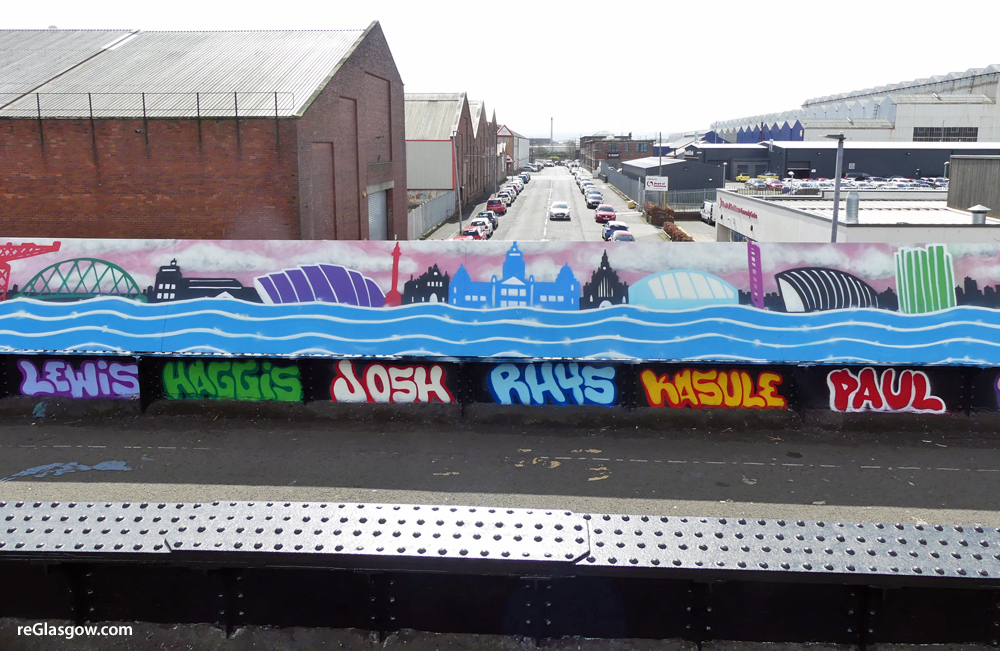 A Scotstoun Community Council representative said: “Scotstoun is very proud of the contribution our young people have made to enhancing the local environment. We are very excited about the unveiling of the mural which is a prime example of what can be done when communities pull together.”

“Dan and the Heart of Scotstoun Community Centre have been great with the participants and have achieved very positive responses.” 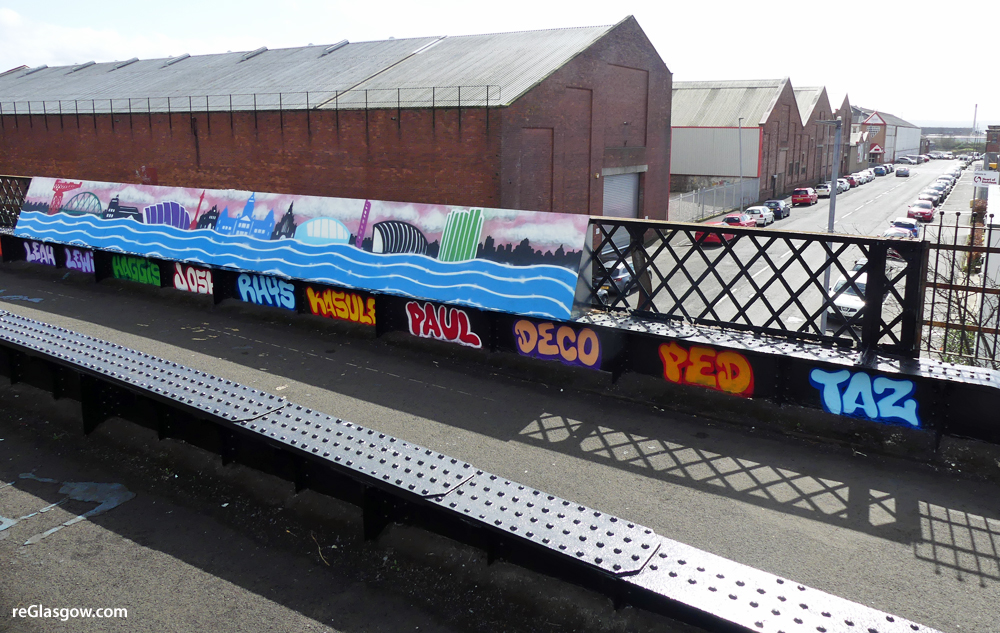 “We have been proud to provide funding for Scotstoun Community Council for the additional metal panels to the Balmoral Street Bridge, which forms part of National Cycle Network Route 7, in order to provide a ‘canvas’ for youth art work.

“Not only have the improvements to the bridge helped foster a sense of community pride in the local area, but they have created a more attractive environment for the many cyclists, joggers, buggy walkers and pedestrians who use the route daily.”