Glasgow City Council issued an enforcement notice for “unauthorised advertisement displays on scaffolding and fascia” of the category A listed building in Union Street last year.

Now officials have refused an application for advertising consent made by Union Street Properties Ltd that was aimed at “formalising” signage at the site.

Above, a computer-generated view of how the signs would have looked, and, below, the building as it currently appears 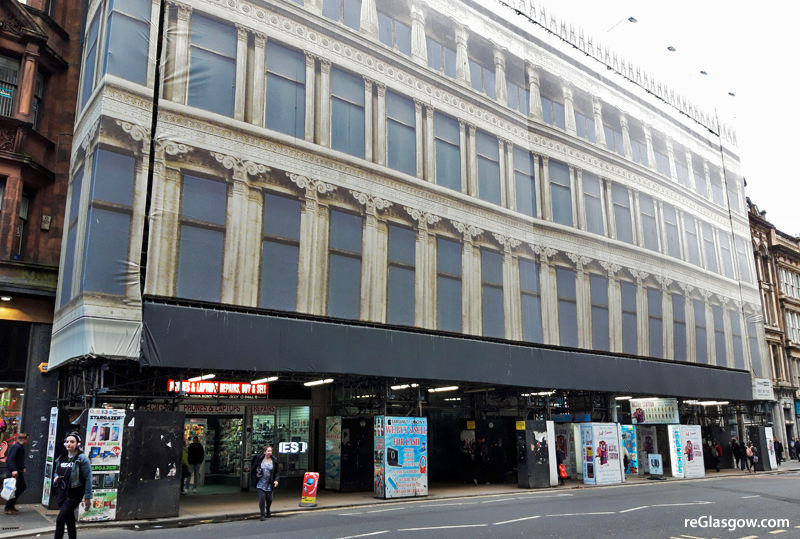 Applicant Derek Souter stated in a supporting document that the scaffolding is “expected to be in place for the next two to three years” and that the signage would mean the ground floor shops would remain tenanted.

City planners however stated in their decision document: “By virtue of the design, dimensions and number of signs, the advertisement display results in over-dominant and obtrusive advertisement clutter which would significantly detract from the visual amenity of the streetscene, the special architectural and historic character of the Category ‘A’ listed building and the visual amenity and appearance of the surrounding Central Conservation Area.”

They added: “Approval of the advertisement proposed would establish an undesirable precedent for further similar displays in the locality with a cumulative detrimental impact on visual amenity and the street scene.”

The Egyptian Halls were designed by Alexander Thomson but have been unused for decades. The Alexander Thomson Society launched a competition earlier this year in the hope that a designer could come up with a viable scheme to breathe new life back into the building.