BUS operator McGill’s has taken delivery of 26 new vehicles to serve Glasgow and the west of Scotland in a major investment worth £4.75million.

The new fleet, manufactured by Falkirk-based Alexander Dennis Ltd, takes McGill’s capital investment over the past five years to more than £30 million, almost £24million of which has been spent on new vehicles.

The buses will be used on two routes — X23/23 Erskine to Glasgow and service 26 Glenburn/Nethercraigs to Paisley –- and have the latest technology for passengers including free on-board wi-fi and a charging socket for smart phones at every seat.

They come with the latest engine technology which meets the Euro 6 ULEV (Ultra Low Emission Vehicle) standard. The vehicles also exceed the Glasgow Low Emission Zone (LEZ) standard which came into effect in the city centre on 31 December.

Ralph Roberts, chief executive of the Greenock-based company,  said: “This is a milestone investment for McGill’s which benefits the environment, our passengers and in turn, serves the wider economy.

“We are delighted to be purchasing these buses, from Scottish manufacturer Alexander Dennis, which feature the latest engine and passenger technology. Some campaigners claim that bus operators are not doing enough to tackle air pollution but this investment in 26 new vehicles brings our average bus age down to under seven years old -– the youngest large private fleet in Scotland –- and demonstrates that we’re going the extra mile and taking a long-term approach to our operations.

“Funding for the new fleet has been found privately with no public subsidies provided. Only by running a profitable business can we invest in the very latest vehicles and it is vital that the government now provides the conditions conducive to allow us to invest further.” 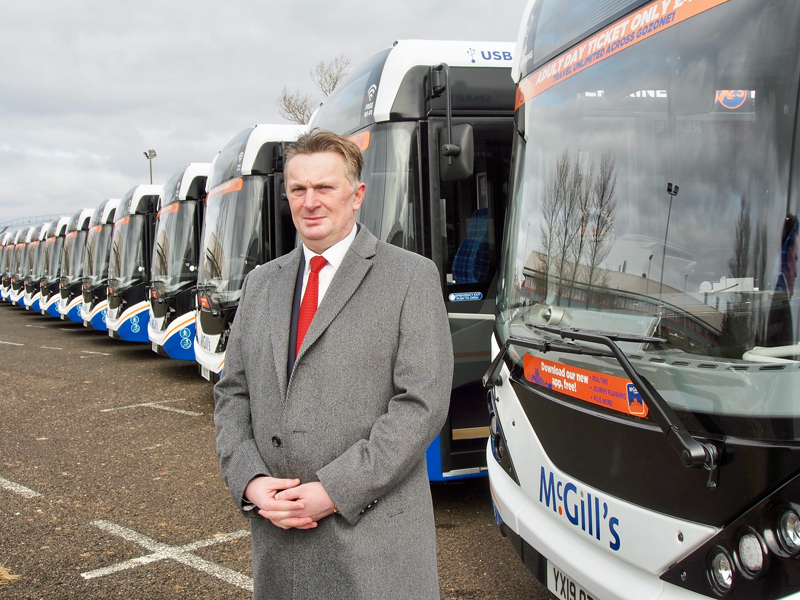 McGill’s co-owner Sandy Easdale, pictured, said: “We’ve made more than £30million of investment in our operations over the past five years, with around £24million focused on new fleet and nearly £7million of infrastructure investment including ticket machines, real-time tracking, mobile and contactless ticketing and smart card systems.

“Most politicians and policymakers agree that it is vital that we encourage the public to reduce their car journeys and cut congestion in the process. However, ditching the car only becomes an appealing prospect to people when we are investing in state-of-the-art buses such as those we are now unveiling.

“We’ve recently seen the Scottish Government deliver a swingeing cut to the latest payment to operators to deliver its free concessionary travel scheme. This is simply because they do not have the budget to fund what they believe to be a vote winner and instead transfer the cost on to operators.

“We cannot pass this cut on to our hard-working staff or our fuel suppliers. Instead, we run the risk of less profitable routes not continuing or future investment in new vehicles being curtailed. The money we have lost would pay for at least one or two of these new buses so we have to think carefully about our approach moving forward.”