MAJOR projects to improve walking and cycling provision in Glasgow have been awarded a total of £25million.

The funding is part of the Places for Everyone programme run by active travel charity Sustrans Scotland and Transport Scotland.

The money will go to two initiatives:

— Glasgow City Council’s Avenues Plus which will extend the existing Glasgow Avenues project to more areas. The £19million investment will provide segregated cycling facilities and footway improvements on a number of streets leading to and from the City Centre.7

Avenues Plus will see phase one constructed before 2022, followed by three further phases. Once completed, Dennistoun, Port Dundas and Laurieston, which are all undergoing significant investment and regeneration, will be provided with direct routes to the existing Avenues and cycle routes.

Duke Street, Dennnistoun, is lined up for Avenues treatment under the extended programme

Areas around Buchanan Bus Station and Strathclyde University and City of Glasgow College Campus will be improved, while Glasgow Caledonian University will be provided with a new connection to the wider cycle network.

New trees will be planted and pocket-parks, including seating and mixed plants, will be created throughout the project area.

The project has been created and driven by local people, for those living and working within Yorkhill, Kelvingrove and Finnieston, with the aim of creating Scotland’s most accessible community for people of all ages and abilities.

To make it safer for people moving around the local streets, new or improved crossing points, more dropped kerbs and adjustments to junctions to help reduce excessive vehicle speeds will be introduced. 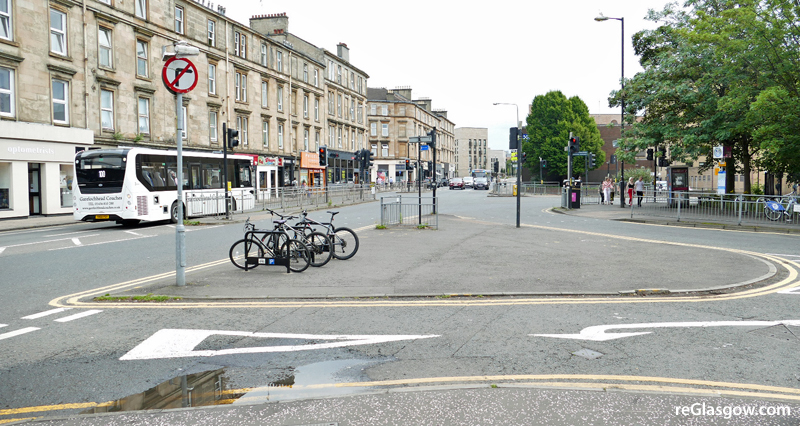 Alongside this, entrances to Yorkhill, Kelvingrove and Finnieston, above, will be improved, with the introduction of trees and planting, new seating, lighting and footway surfaces.

It will also add to Glasgow’s growing collection of public art by creating a new mural trail, celebrating the shared history, culture and heritage of the local community. An augmented reality trail will allow children and young people to explore local history in more depth.

Both projects will integrate or create new links to existing projects within the city, with connections to the existing Connecting Woodside Places for Everyone project and the wider network of cycle-ways throughout the city.

The Cycle Village and Avenues Plus both aim to reduce localised air pollution, improve health outcomes by reducing the barriers to people walking and cycling, and strengthen the local economy by attracting more people to local businesses though ease of access.

The city’s lack of bike storage is also expected to be tackled with the pilot of new high capacity public bike stores based on models used in the Netherlands, helping to make sure tenement dwellers and those short on storage space can secure their bikes.

Grace Martin, director at Sustrans Scotland, said: “We’re all changing the way we think and act to get from A to B. Much of this step change is as a result of society becoming more aware of the effects of carbon emissions, but it’s also steeped in people wanting to live a healthier lifestyle and become more active.

“Places for Everyone is focused around empowering communities to help make this step change easier by ensuring we have the right provisions and infrastructure in place so that journeys made by foot or bicycle are safer.

“We’re extremely excited and encouraged by the projects chosen to receive funding this year and we look forward to working in partnership with Glasgow City Council to roll out these projects that will benefit so many local communities’ route to active and sustainable travel!”

Wendy Shaw, chair of Yorkhill and Kelvingrove Community Council, said: “We are incredibly proud that we have been successful. All the dedication and hard work of our volunteers has paid off. To be the first community-led bid has been an experience and we have all learnt so much, it’s not been easy but our success shows what can be achieved by a community working together.

“Following this announcement our team of volunteers is energised to work with local residents, housing associations and businesses to create a detailed plan. We would encourage all those who live or work within Yorkhill, Kelvingrove and Finnieston to share their thoughts and needs to help us create a community fit for the 21st Century.”

Andy Waddell, director of operations for neighbourhoods and sustainability at Glasgow City Council, said: “This is absolutely fantastic news for Glasgow. The award of £25million is a massive endorsement of our vision of Glasgow as a cycling city where cycling is a safe and attractive mode of transport for all.

“A huge amount of credit must go to Yorkhill and Kelvingrove Community Council for their determination in ensuring their community is a fully fledged part of the work to transform cycling in Glasgow.

“The plans for the Yorkhill and Kelvingrove Cycling Village have been developed by the community for the community and will support the residents’ ambitions for safer and greener streets.

“But the YoKeCoCo cycling village will also create vital links between national cycle routes, making it much easier for people who cycle to get around the city as a whole.

“Our Avenues plan will make the city centre more accessible by bike and step by step the vision of an increasingly connected cycling network in Glasgow is being realised.”